If you are coming to an outdoor games event like ours, chances are that you’ve probably played cornhole before, but rules can sometimes vary, so let’s go over how Cornhole will be played at The Blaise Games.

Cornhole will be played in teams of 2. This event will be played as a single elimination tournament. EVERY WIN WILL EARN POINTS. Point values for wins will increase each round
Boards are 2’ wide by 4’ long with a 6” hole. We will provide all bags. You may not use your own bags. The bags we are using feature a ‘Slick and Stick” side – one side of the bags will slide more while the opposite side will stick and not slide as much. The front of the boards will be placed 27’ apart

First is the coin flip – the winner of the flip will choose which side of the board their team shoots from. Teams must stay on the same side the entire game, no moving from one side to the other, you must always be across from your teammate. See picture below. The team that loses the coin toss chooses who throws first in the first round. 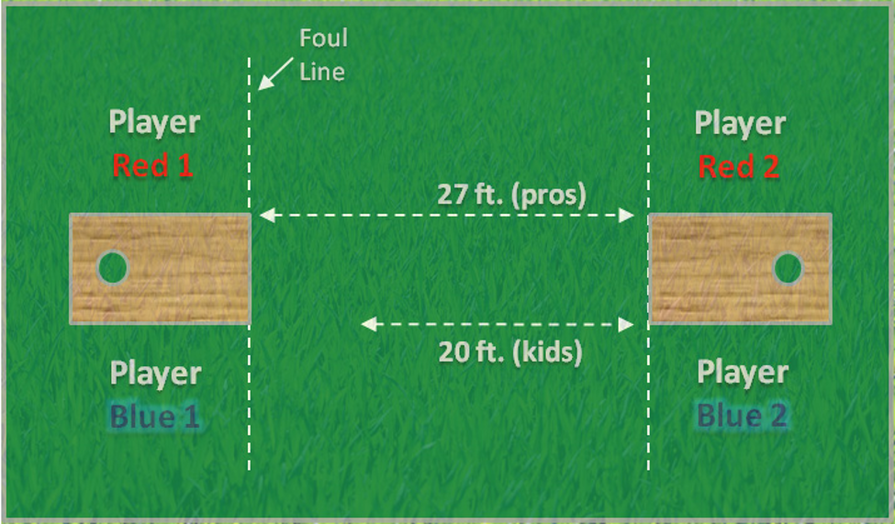 When all the bags have been thrown for that round, points are totaled. Points are determined based on where the bags land in relation to the boards. Three points are awarded when a bag goes through the hole, one point is earned if the bag lands on the board. Bags that are hanging into the hole or hanging off the board but not touching the ground count as 1 point. If at anytime a bag touches the ground, that bag is removed from the playing field, bags cannot bounce onto the board. Points are totaled after each round and points cancel. The team with the highest score of a round adds the difference between their score and the opposite teams to their running total. If both teams have the same score in any given round, this is called a “Wash”. No points are awarded and the score stays the same. The first throw goes to the team who had the honors in the previous round.
Another example of scoring. If Red Team gets 7 points (2 in the hole and 1 on the board) and Blue Team gets 4 points (1 in the hole and 1 on the board) then Red Team would be awarded 3 points. 7 minus 4 equals 3. The first 4 points are canceled out. Red Team would then throw first the next round.
The next round begins from the opposite cornhole board with the opposing partners taking turns tossing their bags. The first throw goes to the team that won the previous round. Rounds continue until one of the teams reaches 15 points or more and must win by 2.

A big shout out to Two Shops Woodworking for supplying us with our cornhole boards. I’ve been playing this game for a long time, and these are by far the best boards I’ve ever played with. If you are interested in a set of boards of your own, be sure to check them out on Facebook, Instagram or their website www.twoshopswoodworking.shop